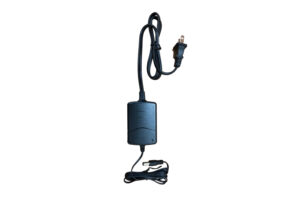 NBS designs and manufactures a full line of custom NiMH / NiCd battery chargers for a variety of commercial, industrial, and military applications.

-DV Refers to the termination or the switching moment of a charge cycle. The -DV is the point at which the battery voltage under charge reaches a level where the voltage dips in a negative slope, hence Negative Delta Voltage. The -DV method is a result of a rapid constant current applied to a battery. A rapid charge current would be a current which is equivalent or exceeds a 0.5C rate. A -DV point would not be apparent if the charge current is less then a rapid rate. In this case, a -DV would not be a recommended choice. A -DV charge method is the recommended choice for Nickel Cadmium battery packs. It can also be used with Nickel Metal Hydride batteries. However, when used with Nickel Metal Hydride batteries, the -DV value is almost ½ that of Nickel Cadmium batteries and is usually as low as 8mV/cell.

=∆T/dt is the recommended method of charge and termination for NiMH batteries. The concept is based upon monitoring the change in temperature of the cells within the pack over a pre-defined time period, e.g., a change of 1° per minute. Similar to the -DV method, this method applies when a Rapid Charge current is being used. Secondly, a DT/dt method does NOT provide a 100% fully charged battery. A DT/dt point usually occurs at a point where the battery has acquired 90% of its capacity.

The use of the DT/dt method requires the monitoring of cell surface temperature. This is accomplished by way of a NTC thermistor. A NTC (Negative Temperature Coefficient) thermistor provides an ohmic value which decreases as the temperature increases.

DT/dt can also be used for NiCd batteries.

TCO is another temperature based method which requires the use of a thermistor and a rapid charge rate. The concept relies on the surface temperature of the cells and a specific temperature value at which a charge current is terminated, or switched from a rapid to a trickle charge rate.

TCO is not the most recommended method of charge for NiMH batteries, but it can be utilized.

The appearance of U.S. Department of Defense (DoD) visual information does not imply or constitute DoD endorsement.

What Can Nova Battery Systems Do For You?

Want to find out more? Contact us today for additional information.

Statement To Our Customers On COVID-19 Pandemic | Dismiss